5 Theatre Reviews ⁠of The Oregon Shakespeare Festival
Downtown Luxury Apartments in Florence, Italy
Your Guide To The Safest Sunscreens. Toss Those...
When Tim Ferriss Asked Me What Podcasts I...
How To Be An Influencer? What Not To...
How To Be Productive And Win — Eat...
Where To Stay In Florence — A Renovated...
FlorenceItalyMy Expat Life in Italy

The location hunt was crazy! The wedding planner showed me a few castles and villas throughout Florence and Fiesole. They were all beautiful, but some too large for my guest list of 30. Also, the locations she showed me were all contracted to use a specific catering company.

That left us with NO location about two weeks before the wedding! That is, until my new Italian Zio (Uncle) Simone came to the rescue. He knows the owner of Castel di Poggio in Fiesole, poggio meaning ‘hill’. We had other options in Florence, but I really wanted to get married outside with a view of the countryside and the Duomo.

Giuseppe, the owner, was so gracious. He typically includes decorations and catering in his overall price, but he understood that Nicco and I had plans of our own, so he cut us a deal.

The castle needed something special to spice it up, so we hired Claudio, from Claudio Piccini Design. He specializes in private events, graphic & interior design, installations and exhibitions. Nicco has worked with him on past business projects, so has seen his talent first hand. He’s quite the personality! Fun, light hearted, but yet stern in his own right. He’s always in a cool leather jacket since he drives a motorbike, pretty Italian.

Claudio was fun to collaborate with. I told him that I didn’t want much structure, a bit of the theatrical and color, but most importantly NO fabric covered chairs or bows! My wedding was set for the 4th of July, so I wanted it to feel like a romantic, summer wedding. He totally hit the mark!

The most stressful part was trying to stay within budget. We knew that for a certain price he would be able to really impress us, but if we lowered the budget the decorations would have felt half-ass, excuse my French. 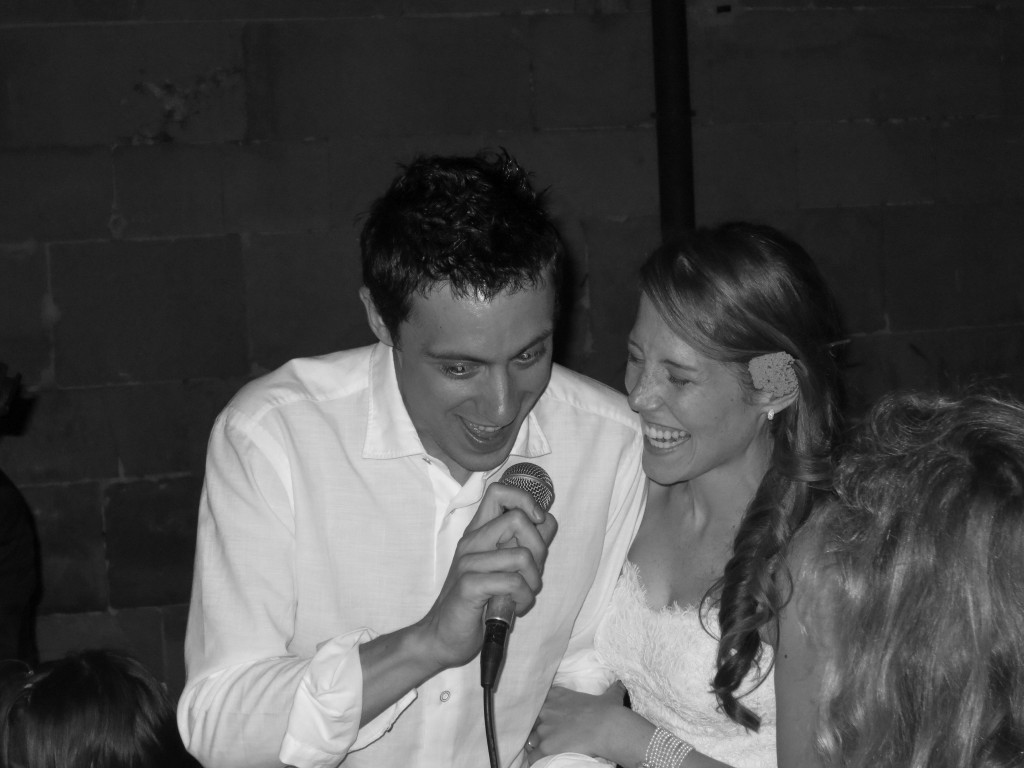 *Photo courtesy of my Step-Mamita, Rosella

Wow, I think the Italian’s taste in music is completely stuck in the 90’s and disco era, the bad 90’s. Every band and DJ that I contacted sent me their playlist. Each one included YMCA, I Will Survive and bad Beatles not even good Beatles songs. How can you screw up The Beatles!?

Well luckily, Zio Simone hooked us up again! By day he (along with Zio Francesco) runs the family Hotel Croce di Malta, but by night he’s a talented musician. So, obviously he has a few musical buddies. He passed along some contacts to Nicco and Nicco took it from there.

We hired two string musicians for the ceremony and a great bossa band for the reception. They let Nicco and I sing some old Italian classics and had my sexy, talented Zia Daniella (above) sing a few fun love songs. The band ended up playing great songs throughout the evening. That is until my new Italian cugina (cousin) jumped into the arms of one zio. They both fell to the ground and my zio dislocated his shoulder. Quite a party!

Did you have any wedding mishaps or just me? Share your most memorable moments.

Like a beautiful fairy tale. So elegant. Thanks for sharing. XO

Thank you Maureen! It felt like a fairy tale. 🙂 I hope you enjoy the following posts as well.

[…] marks two years since Nicco and I married in Fiesole, Tuscany. After that day something in my brain switched. It’s like there’s a marriage […]

[…] create any mood with a single flower. With her powers combined with Claudio’s, our decorator, I knew I would get what I was […]