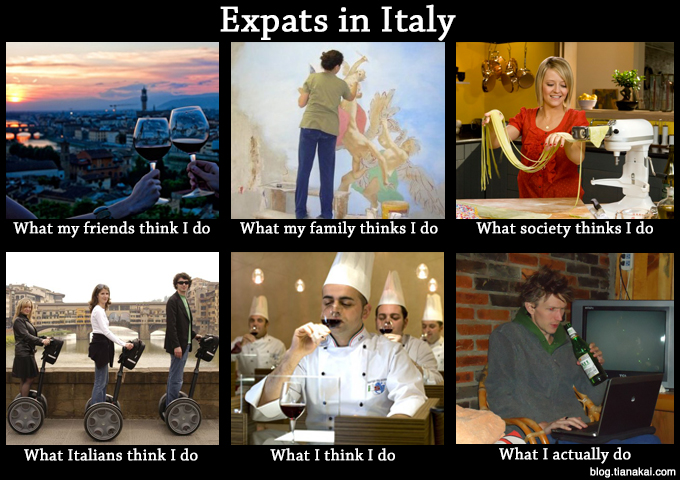 After living in Florence for a year now I’m starting to finally feel like it’s my home… slowly understanding my way around and having my favorite hangouts and restaurants in my back pocket. As an expat in Italy, I’ve seen a few things that other expats (including myself) may do often in their expat life abroad.

This will be an ongoing list like the American phrases that don’t translate well I wrote a while back, which seemed to have been quite a popular one.

Add more in the comments below and don’t be shy share this post and pin that meme!

great post Tiana, guess I fit the bill, especially when it refers to being an ATAF regular and calling my girlfriends ‘bella’. Its a hard life, isn’t it ;-). Happy July 4th!

Thanks, Happy 4th! 🙂 I use bella in emails more for Italians, I’m not sure if I’ve called anyone that in person… can’t remember. I still use ‘mami’ from Miami sometimes.

Yes. Hate tourists! (except when I’m the tourist in another country and then I make sure to be as cheesy and annoying as possible as payback). I have found myself pretending that I don’t speak English when a tourist — American or other — asks me for help. I swear, I’m trying to become a better person.

Oh boy Silvia! I know you are better than that lol. I am pretty nice to tourists, but get irritated by loud ones taking over places… some people in general don’t know their surroundings.

hahaha this is really a fun post – I love it. going to share it with my readers 🙂

#14 for sure—I wish my life was filled with unicorns and rainbows!

I was just going to second this, Kaley! I use pet names like ‘guapa’ and ‘hija’ constantly (really sets me apart up here in Galicia, as it’s very, very Andalusian), and the part about the lines! Hilarious.

Ya it’s incredible how people push here, at least in Florence and up in the Alps in the ski lines. Kind of annoying!

I haven’t called anyone ‘gorda’ in awhile, but sometimes I throw in a ‘mami’.

Love all of these and even tho life isn’t filled with rainbows and unicorns, sounds like the cheap wine worth drinking and well-deserved pasta snobbery still make Italy a great place to live! 🙂

Yes Jess, there is major pasta snobbery going on over here! Who needs unicorns when you have €4 a bottle wine that would be $18+ in the states?!

[…] assumed like any other good expat in Italy that Italy’s where it’s at for coffee. And it is, it’s just that some bars […]

[…] longer I live here, the more I see expats in Italy being completely enamored with a country we now call home. Yes, many complain here and there, but […]

[…] love noticing different nuances in a city. You may want to read other cultural posts like You might be an expat if… and How to ski like an Italian. My personal favorite is how I was Spanglish deprived in […]