5 Theatre Reviews ⁠of The Oregon Shakespeare Festival
Downtown Luxury Apartments in Florence, Italy
Your Guide To The Safest Sunscreens. Toss Those...
When Tim Ferriss Asked Me What Podcasts I...
How To Be An Influencer? What Not To...
How To Be Productive And Win — Eat...
Where To Stay In Florence — A Renovated...
EuropeItalyTravel 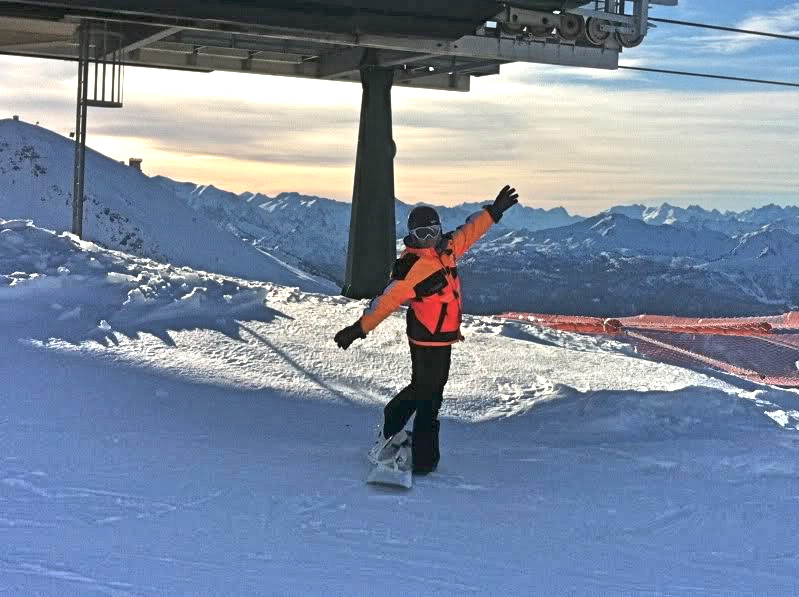 “Snowboarding is an activity that is very popular with people who do not feel that regular skiing is lethal enough.” — Dave Barry

Ski and snowboard in Sestriere, Italy

Snowboarding has been my latest obsession. It began when I moved to Boulder, Colorado in November 2010 on my birthday. It was an amazing birthday. I spent it in a new city, or town if you will, with a new job as Interactive Content Manager at Crispin Porter + Bogusky—a kickass, global, digital, advertising agency.

During the weekdays I worked my butt off and during the weekends I boarded the Rockies (Vail, Breckinridge, Keystone, Beaver Creek and the Tetons in Jackson Hole). Enough of my past, now onto the Alps…

Meaning ‘an area of land formed or lying at the foot of a mountain or mountain range‘ borders France and Switzerland. Torino (Turin), the capital of the region, is a gorgeous city with just under 1M inhabitants.

If you have time, I highly recommend passing by for a few nights on your way up to the Alps. It’s notorious for its galleries, museums, universities and politicians, not to mention it’s home to Fiat’s headquarters.

As for the Alps… it’s beautiful up here—clean and quaint with the mountains jetting out of every view. There are so many little ski towns all around, so if you rent a car you should definitely explore the area. Some of the best restaurants may only be a 20-30 min drive out of where you’re staying. 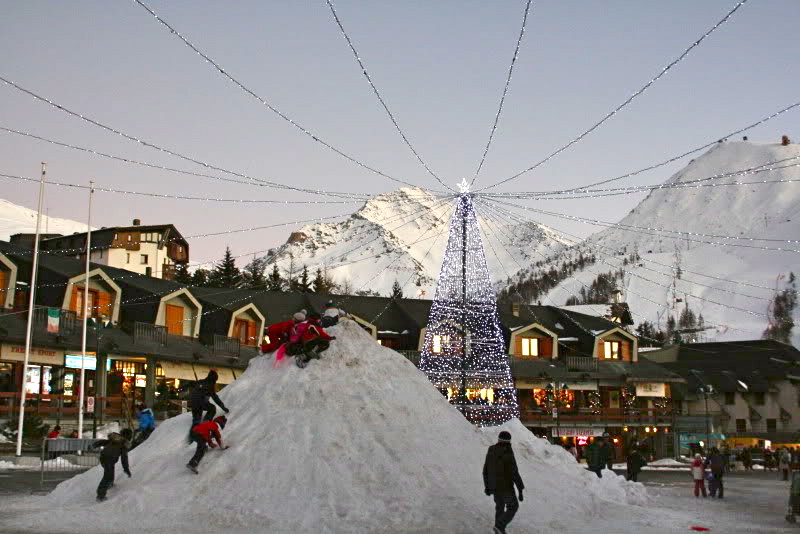 My husband, Nicco, flew me from Boulder to Milano in December 2011 where he picked me up and drove us to Sestriere, Piedmont about 2.5 hours away. He has been skiing here since he was little, so is familiar with the lifts, runs, restaurants and most importantly, the local butcher.

Renting a car from any city airport is a great idea if you want to explore the region, but if you know that you’ll be content in staying put in one mountain town then a train may be best. 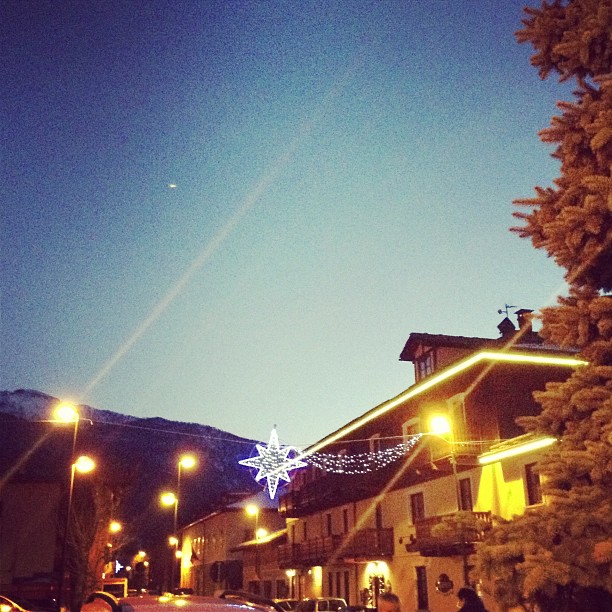 This year we took a train from Torino Porta Nuova (Turin), which is a main train station, up to Oulx-Cesana-Claviere-Sestriere for less than 6€. Wow, that’s a long destination name and not a bad view from the station!

Basically, in order to get to Sestriere you need to get off at Oulx, which was more than cute and jump on a pullman (bus). The bus ticket was 1.50€ each for the 40 minute ride up. We bought the tickets at the train station’s coffee bar and boarded right away. It was a beautiful drive up with many windy turns. 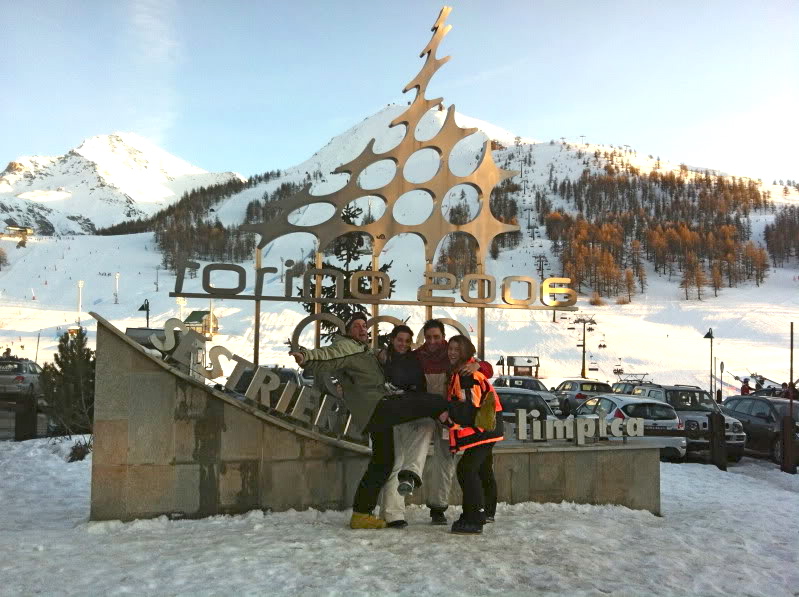 Sestriere is a part of the Vialattea (Milky Way) mountain range, which has 598 individual piste (ski runs). It was home to one of the three Olympic Villages of the 2006 XX Olympic Winter Games.

The slopes here are on another level. They are steep and wide with little to no trees. The Alps prove to be its own beast compared to so many other mountain ranges. 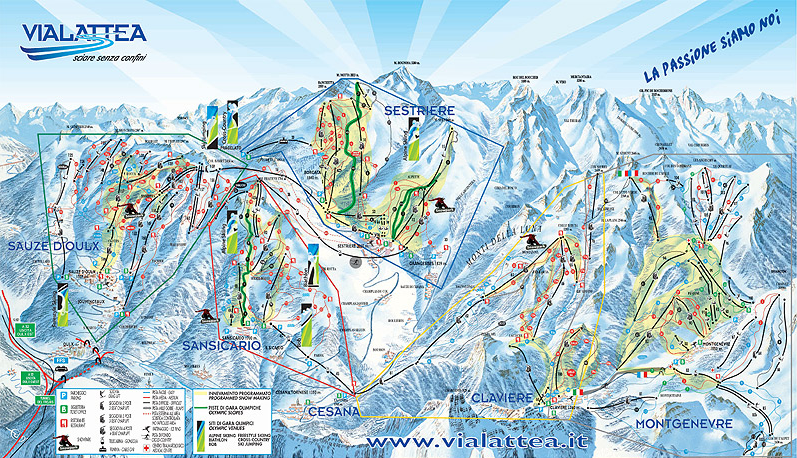 The runs are as follows: blue for beginner, red for intermediate and black for advanced. The conditions last year were icy for me (I’m still a novice!), since it didn’t snow that much early on in the season, so lots of scary down hill turns on my board.

Nicco’s a skier, so the conditions were pretty choice for him.

It seems like the steepest sections are always at the end where the whole town is watching. There’s always one poor guy who completely eats it right at the end, in front of everyone… well that was me in front of Chalet Raggio di Sole at the end of a run last year. Ouch for my bum and my ego! 😉 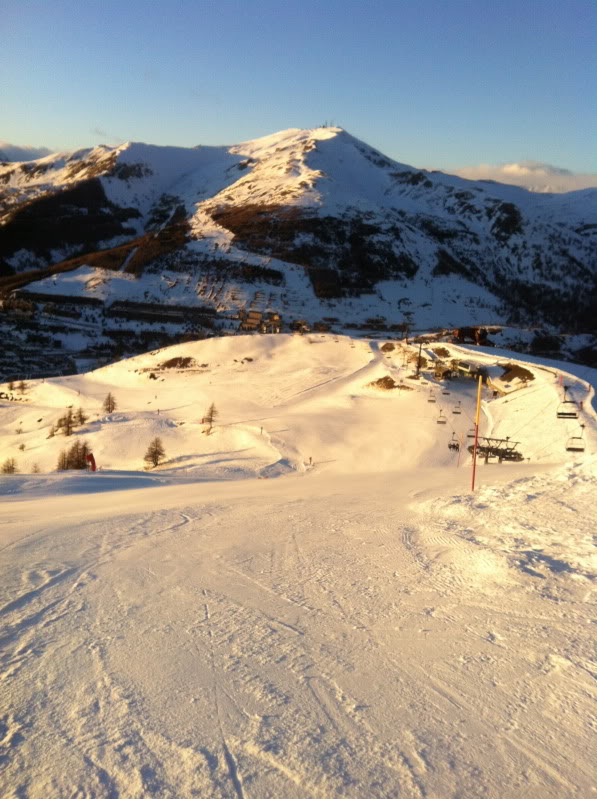 heading down an obvious black YIKES!

Luckily, the conditions are a lot better this year, so much so that the mountain across from us is open too! Now that I’ve boarded Sestriere we can check out some other runs and mountain restaurants.

Oh, and don’t forget this mountain offers night skiing on the same run that many Olympic champions have skied on! brrrrrr…

The ski pass gives you access to 6 mountains: Sestriere, Sauze d’Oulx, Sansicario, Cesana, Montgenevre and Claviere. Not that you’ll ski all 6 in a day, but at least 2 are completely doable. There’s hardly ever a line if you don’t ski during the main Holidays. The base of the mountain sits right by many restaurants and bars right off state road SS23, so perfect for a celebratory beer after a ski day!

Party in the Alps!

The Alps is a wonderful place to relax, eat, party and enjoy an Après-ski after a day on the slopes… even if you’re a skibunny hopping along the center without a thought in the world about the mountain conditions, you too will have an amazing time!

We celebrated Natale (Christmas) and Capodanno (New Year’s) last year and Capodanno here again this year. There’s nothing like a Winter Wonderland for the Holidays! 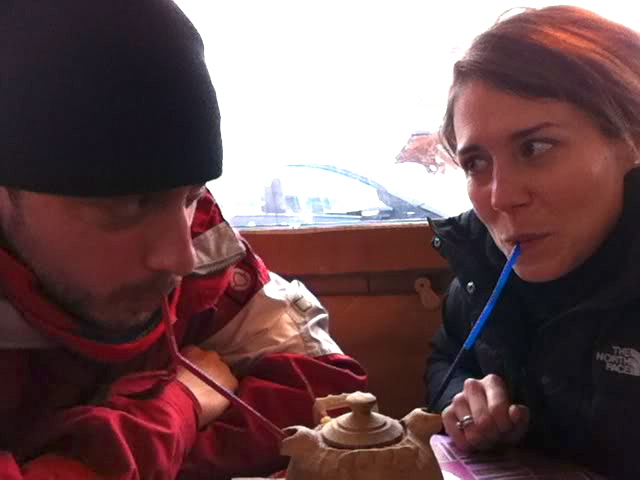 There are two large nightclubs open, especially during NYE: Tabata and the Sports Center across the street if you want to get down and par-tay!

Check out last year’s video of the main Piazza right at midnight.

It’s great to be able to wear my Moon Boots and santa hat again. High society fashion, let me tell you. 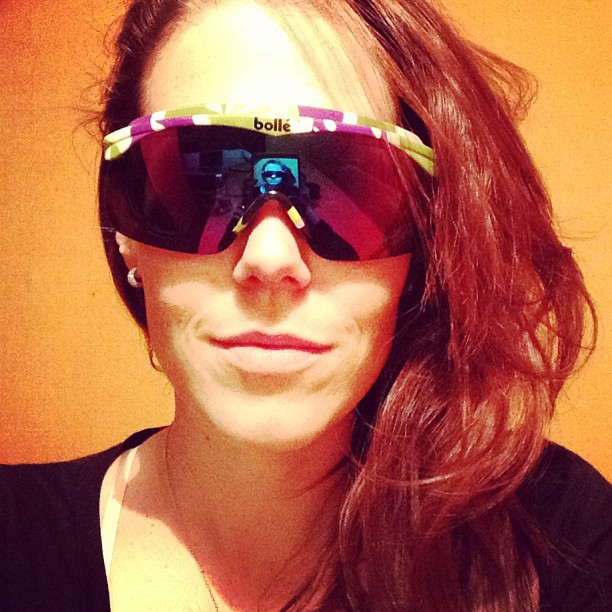 There are retro ski suits hanging in the family condo since the 80’s or earlier, so there are many precious treasures laying around, like these mega sunglasses. Pretty hot, huh? If you want tips on how to fit in fashion wise (note the sarcasm) check out ‘How to ski like an Italian‘.

The food is amazing! Here’s a list of the most typical food and drinks in the area, which are some of my favorite things on any given menu.

You can always bet that there’ll be overflowing polenta, sausages, fondue, crêpes and chocolate (just to name a few) everywhere you turn. If you happen to make it to Sestriere or neighboring towns check out these top spots to eat and drink.

Let me just remind you all that season 2012/2013 will be my third season, so I’m not a pro, but I can get my butt down anything… thanks to my Colorado boarding crew. Thanks guys! 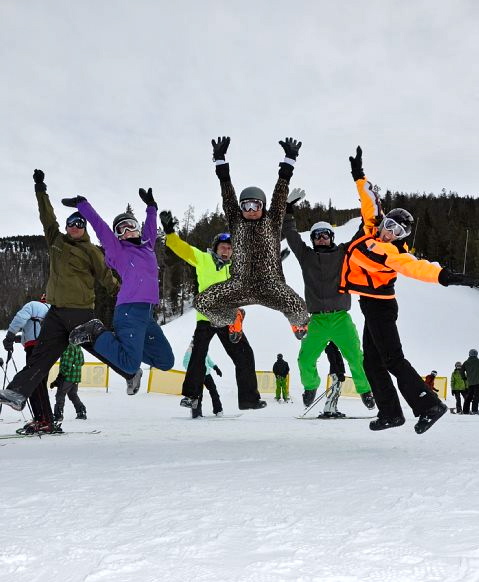 jumping for joy in Keystone 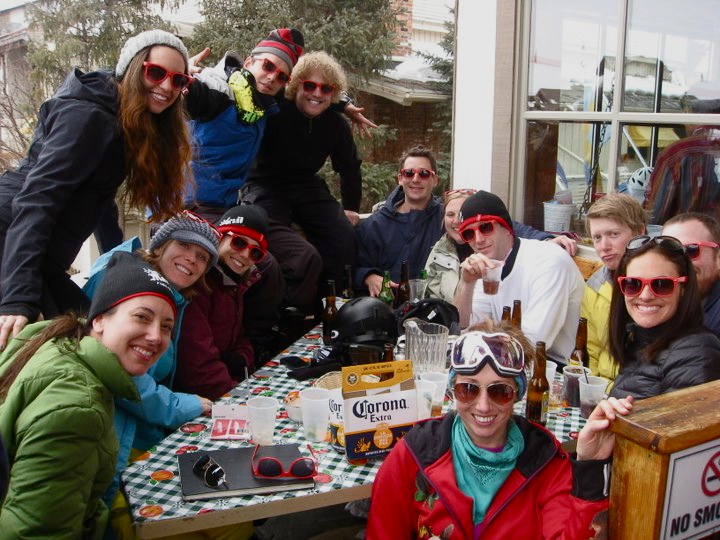 What’s your dream mountain that you would love to ride one day?

Hiya- I’m going to be in Italy during February half-term break and will be looking to spend a day on the slopes whilst there. Friends are flying to Milan where I will be meeting up with them after an initial 2 days in Turin. Your tips on train and bus tickets from the city into the mountains are great!! Just wondering how relevant prices still are from your blog..?? =)

Great post and I love the quote about snowboarding at the beginning. I’ve personally never tried but it’s something I’ve always wanted to do!

[…] 8th. It would be great if I could get up there and warm up my novice boarding legs before we hit the Alps for new years. If I don’t make it up there in time then maybe I’ll have a go at Firenze […]

[…] going to get right into the delicious portion of skiing in the Alps. This list is based on my over indulgent experience in Sestriere, Piedmont for the past few […]

[…] may remember all those snowboarding trips I took to Sestriere in the Italian Alps. I’ve been lucky enough to find myself surrounded by snow each winter, […]