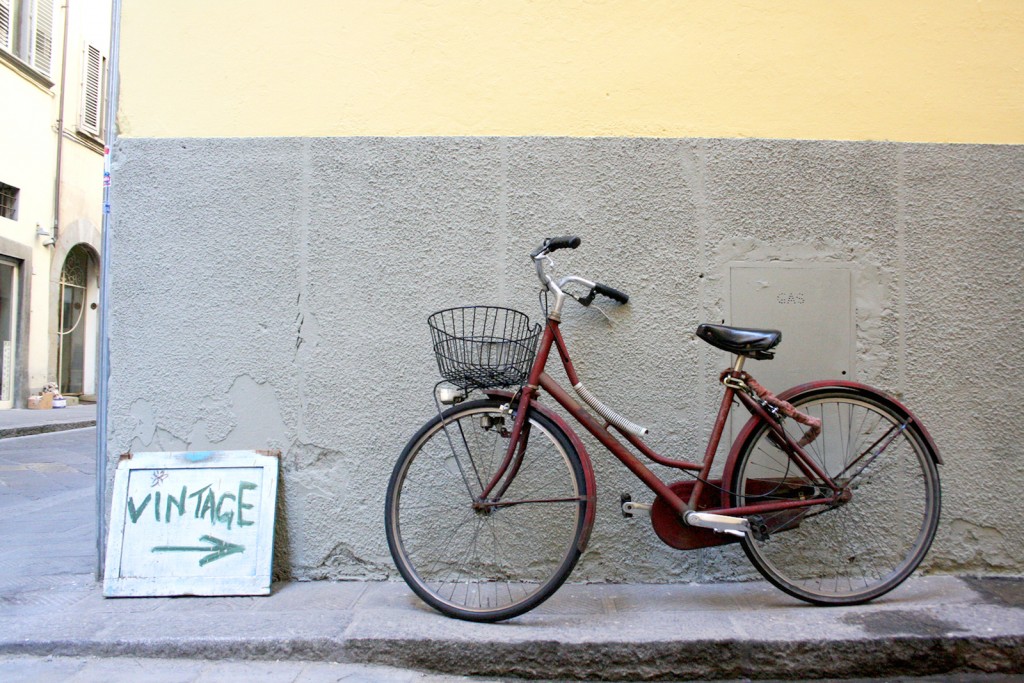 After moving to Florence four score and seven years ago I finally got a bike, finally! Her name, Valentina.

She’s a dandy bike, happy to take me along through all the crazy narrow cobblestone streets of Florence, on all the endless bumps she finds and available bike paths.

I can now experience the city on a regular basis and get fewer headaches since public transportation is a thing of the past…unless it rains!

Valentina, my bicycle, showing me around Piazza Santa Croce

1. Buy a used bike, new bike’s are for suckers

It’s amazing how much charm an old bike has. The shape, the chipped off multi layers of paint, the basket…

Let’s be honest, we don’t all buy old bikes for their aesthetic charm. We buy old bikes because it will get robbed sooner or later so why throw down 200€ or more to then be left heartbroken when POOF it’s gone!

Valentina was 65€ and I love her. Although she recently gave me trouble and decided she didn’t want to work. After spending another 34€ at the bike shop she’s up and running. So, now I’m in 99€, ugh, maybe a new bike doesn’t sound that bad after all?! 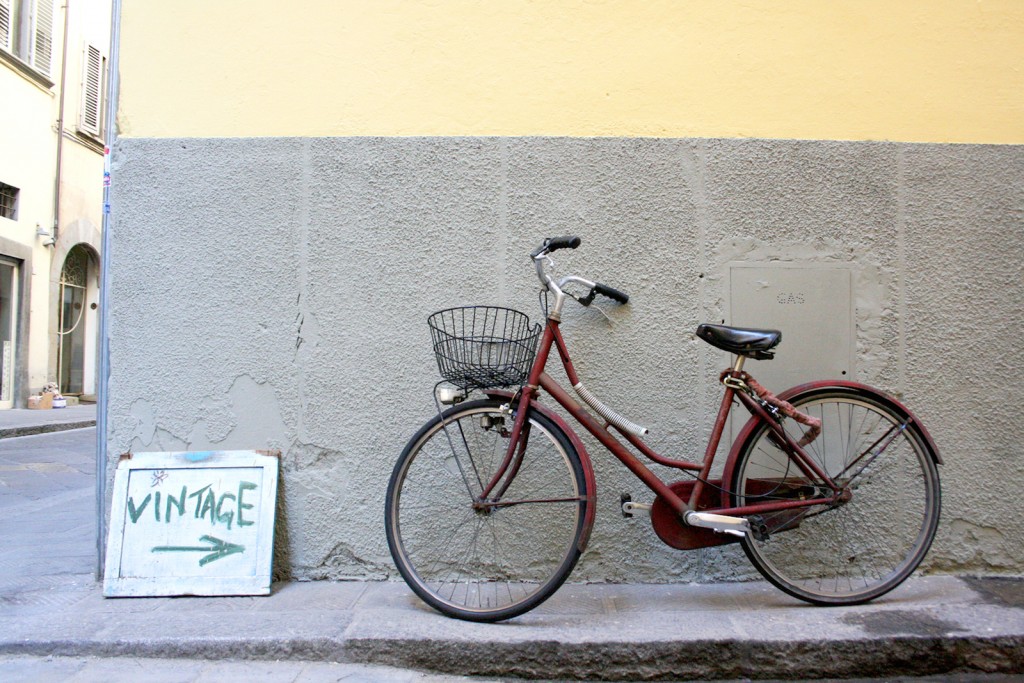 My husband, Nicco, has had several bikes in Florence and has tested out all types of chains and locks. His theory is that every bike will get stolen, so don’t waste 50€ on a mega chain lock because those can be cut in half with the right tools.

A friend of mine had a cool bike with TWO mega chains and arrivederci to that bike as it now belongs to some random dude who bough it off the guy who stole it from you! 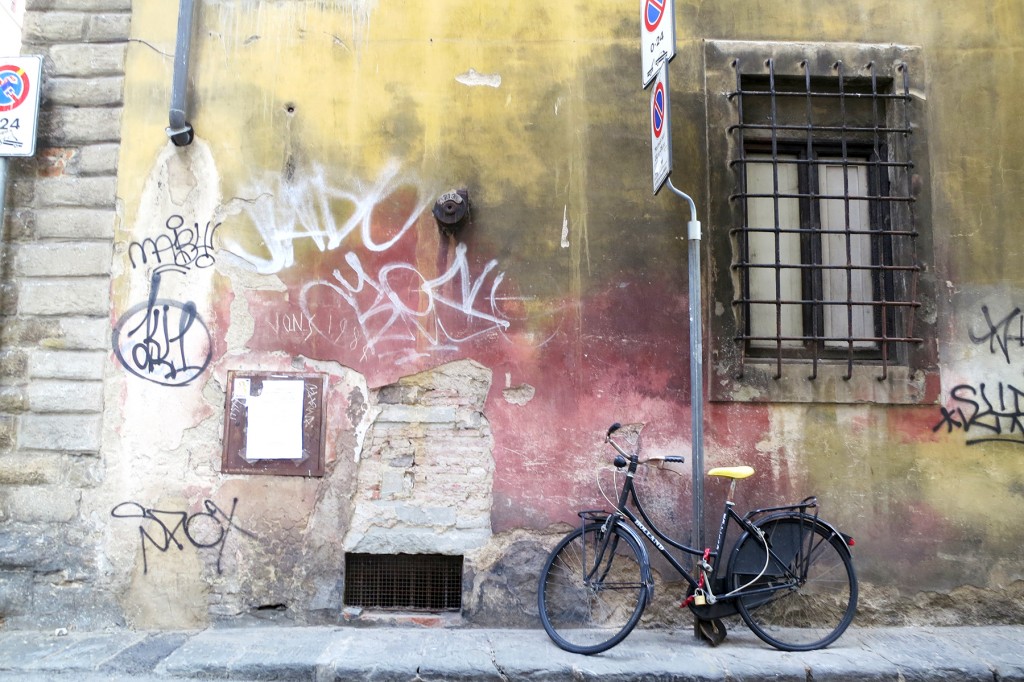 3.  Get a squeeky bike with good enough brakes

Good enough as in they won’t stop your bike immediately, just good enough so you don’t hit a wall. My brakes make the most horrendous sound; they’re so loud and piercing that they just make me laugh.

The best is when I ride Valentina downtown and out of nowhere some other biker appears and their bike sounds like a metal factory. I smile and think “ha, your bike sounds worse than mine”.

Why put effort into ringing your bell when your bell can ring itself each time it hits a bump or even rides over a crack? Remember you need your hands free to talk on the phone and smoke, not for bell ringing! 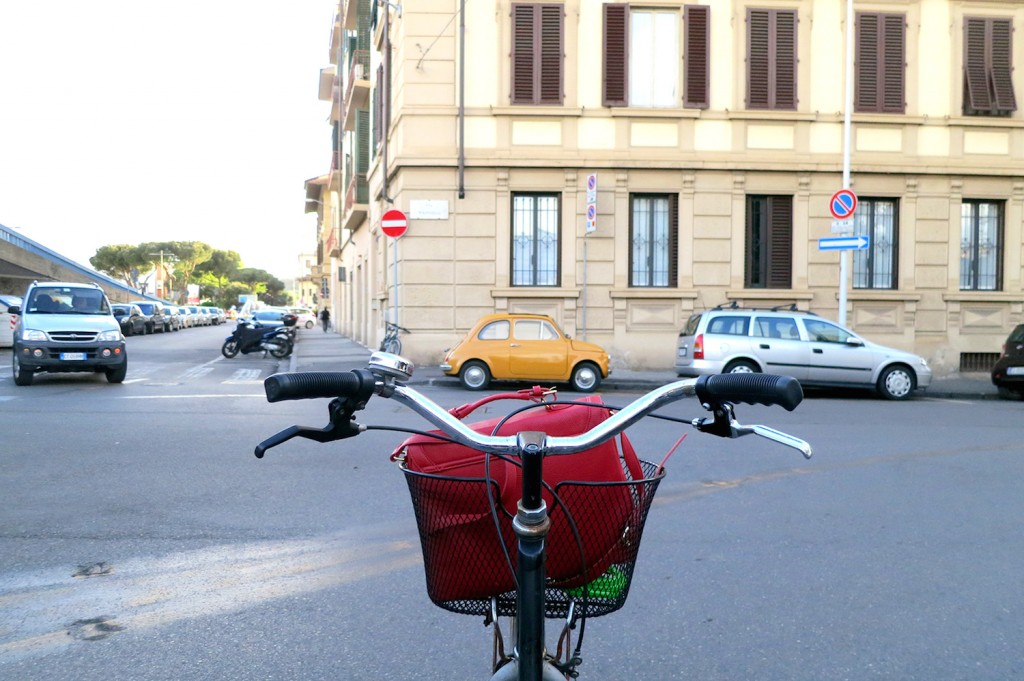 5. Leave your bike in your apartment each night

I live on the second floor and actually have an elevator, which is pretty rare, but I never use the elevator and more importantly my bike doesn’t fit in it. So, Valentina is a woman of the night and is left to sleep on the streets.

My neighborhood is not touristy and is sans gypsies, so I may have a higher probability of NOT having it stolen by my house, but who knows. Many friends of mine say they never leave it out at night…what a hassle.

6. Don’t park your bike in the same spot twice

Oh, time to trick those clever clever bike snatchers! I leave my bike in the same spot at night, but when I feel creative I move her to a different pole. Do you think this outsmarts those bike thieves?

If you’re just running into a coffee bar for a hot second or grabbing a cocktail somewhere why bother with looking for a pole to lock your bike to? Ain’t nobody got time for that! Edge your bike up to the sidewalk, lay the peddle on the stoop and lock that cheap lock around the wheel and metal bar and grab that cocktail. It looks chic, doesn’t it? 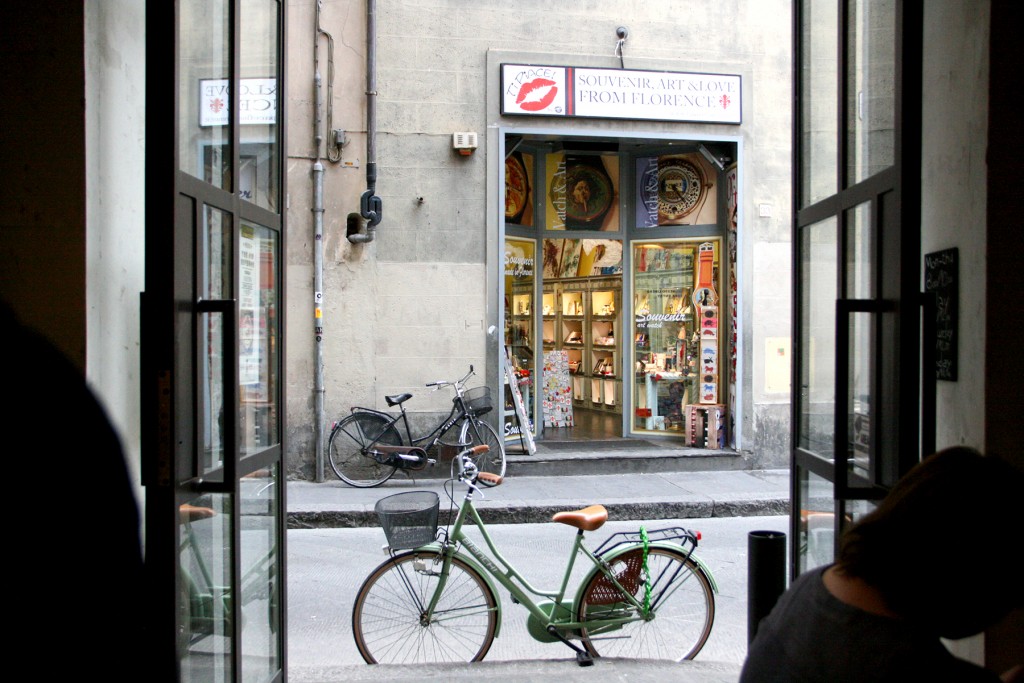 Helmet, what helmet? Riding a bike in Italy is like skiing in Italy, helmets are not allowed. It ruins one’s hairstyle and overall look. The only time you need to wear a helmet is when it’s mandated on a bike tour or when your riding a Segway.

9. Work out your forearms before riding

The bumps on the street can be severe so to avoid bikers cramp (ya, just made that up, but it’s a serious threat to city bikers), work out your forearms on one of those malleable stress balls.

10. Stick to the biking paths

I’m lucky because I have an amazing biking path that takes me all the way to the Arno River in less than ten minutes. It’s a gorgeous path and I arrive at a beautiful part of town with lots of trees which leads me right to downtown Florence.

11. Take your time, even if cars are behind you

If you ride your bike in Italy note that you’re the king of the road, you can ride down any street. Since you’re on a city bike with one gear—or a fixie, which sounds so much cooler—then you can’t be rushed, so go your bike’s speed and just cruise down the narrowing streets no matter if cars are behind you. 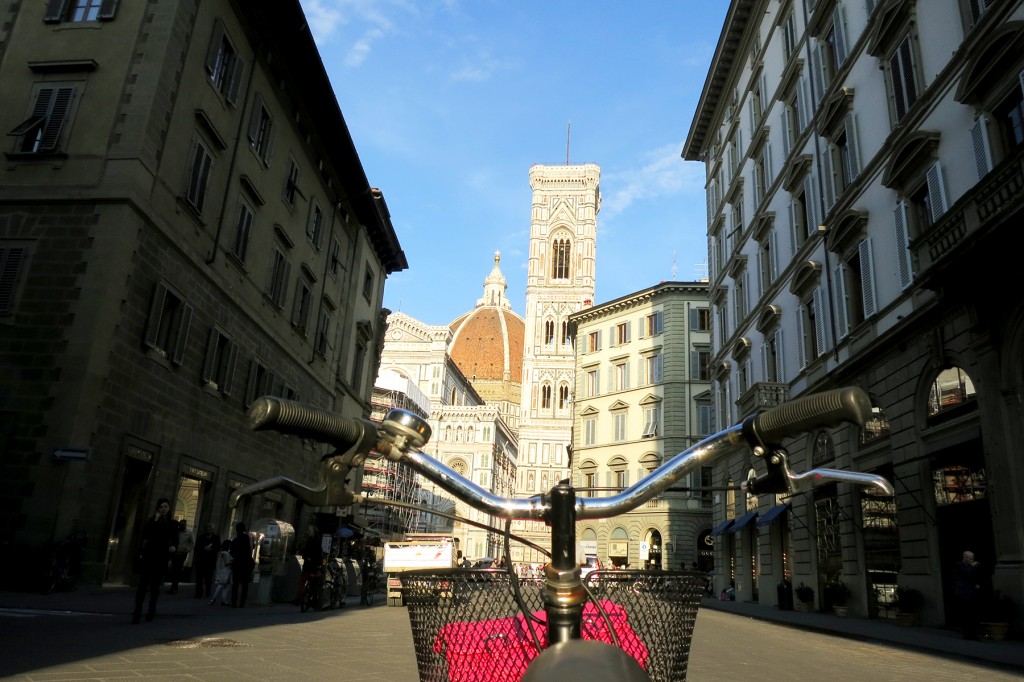 12. Watch out for pedestrians who clearly have never seen a bicycle before

Why is it that when I ride downtown I feel like I’m having a stare-off contest with a dude on foot. Wanna play chicken? Valentina can totally take you!

I let my self-ringing bell do its thing, but still nothing. People are not fazed by the fact that I’m going to possibly hit them. This biking experience has made me a nicer pedestrian to cyclists, since it’s not fun to have to stop abruptly because someone can’t move an inch over.

…but not too much or it will get stolen quicker. Make your bike look cute, give it a personality! If you’re a chick, then add some fake flowers and a pretty basket. If you’re a dude a wine crate DIY basket is perfect. I actually have a wine box that I’m going to attach on the back of Valentina, she loves wine! I may even hit up the dollar store and add some flowers to the front basket, we’ll see. 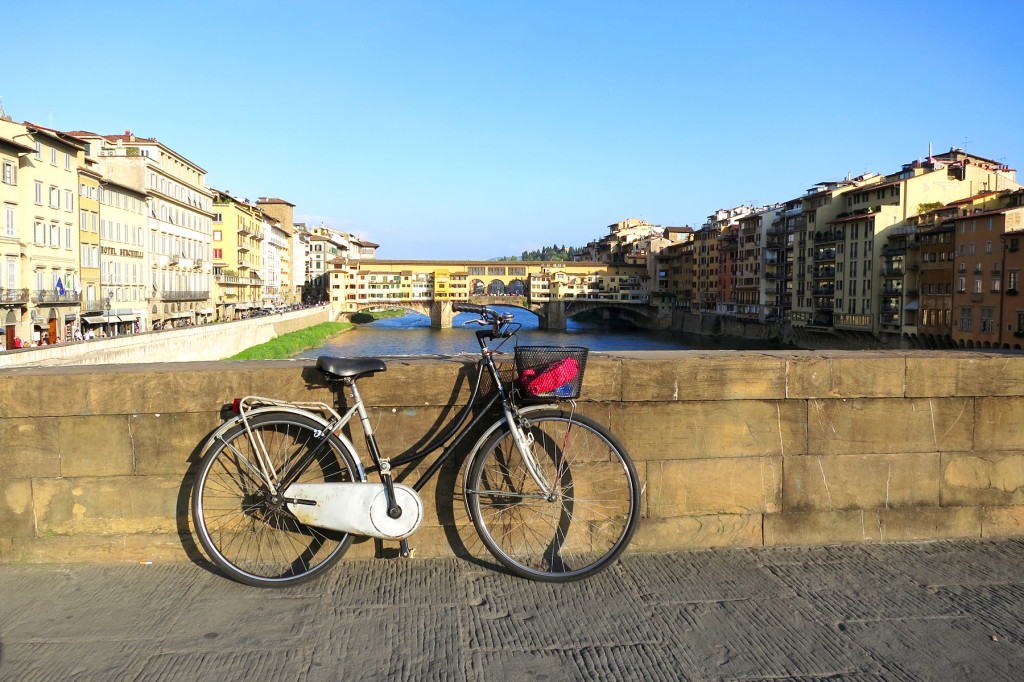 Valentina taking me on a tour of Florence

14. Always, and I mean always, cover your seat with a plastic bag from Coop

Some say that it helps protect the seat from the sun and rain and according to the awful Summer showers we’ve been getting I guess I wouldn’t want a wet bum either, so best to cover your seat with a plastic bag. I must admit that I bit the bullet and covered my seat for a week.

I felt so dorky! Valentina is no longer wrapped in plastic, she’s fine in the nude.

If you want more useless tips check out How to do laundry like an Italian!

Any bike riding stories you can share or other obnoxious tips?

Hilarious. Getting your bike stolen in Spain is practically a rite of passage!

Geez, I hope mine lasts a few months before it’s swiped!

Oh thanks Annie! Glad you liked it and I appreciate the tweet 😉

As a pedestrian, I prefer the self-ringing bell instead of the guy who equates its dinging to a NYC taxi horn.

Totally, but when pedestrians don’t move you gotta go to plan b, scream and ring like crazy! lol

I love those old look bicycles so much better than the modern ones!

Me too, so much character!

This post reminded me of the “Bicycle Thief”, the iconic 1948 Italian film by Vittoria De Sica. Surprising how little these bicycles have changed over the years!

Ah yes, I saw the Bicycle Thief twice. Slowest movie to ever win an Oscar 😉

I might have to try out the public bikes I found here in Perugia. Not sure how I’ll do on the huge hills here though.

Oh ya hills are not good with a one speed city bike. In Florence we have underpasses so the cyclists can avoid riding over the small little overpasses in town. Good luck!

[…] I always had an excuse to not buy a bike, like “no, we’re leaving on a trip, so why spend money on a bike if I won’t be here to use it” or “mammamia, it’s too cold out!” or “mammamia, it’s too hot out!” I’m happy to say that I FINALLY got one four months—her name is Valentina—and after a week I finally was able to ride a bike like an Italian! […]

[…] night was so perfect, I got to ride my bike around downtown and enjoyed some Prosecco on Ponte Santa Trinità with Nicco. Let’s see how […]

[…] went my bike brakes and in I went. I’m actually writing this now while I slowly sip on Fior di Zagara and […]

I’m sure you already know that Valentina sound like “va lentina”, she goes a bit slow 🙂

Yes Luca, a friend of mine is named Valentina and she makes fun of her name a lot. 😉

[…] writing about my love for Florence and fun cultural posts I’m excited to finish a series about Maremma, Tuscany. I was in Maremma for six days and saw […]

One of my teachers in Florence had a story about her bike – she had spray painted it neon colors so there would be no mistaking it, and it got stolen. Lo and behold, she saw someone riding around on her neon bike, so she ran after them and actually shook them off her bike and got it back. If I remember right, after that she would remove her seat from the bike when she parked it, and she had the seat post sharpened or something to give potential robbers a nasty surprise.

Oh, I like the bike seat idea. OUCH! You have a clever teacher.

[…] Seriously twice. I thought I would bike more often, but my car was just too nice to resist. Now I have a bicycle like any good European and actually ride […]