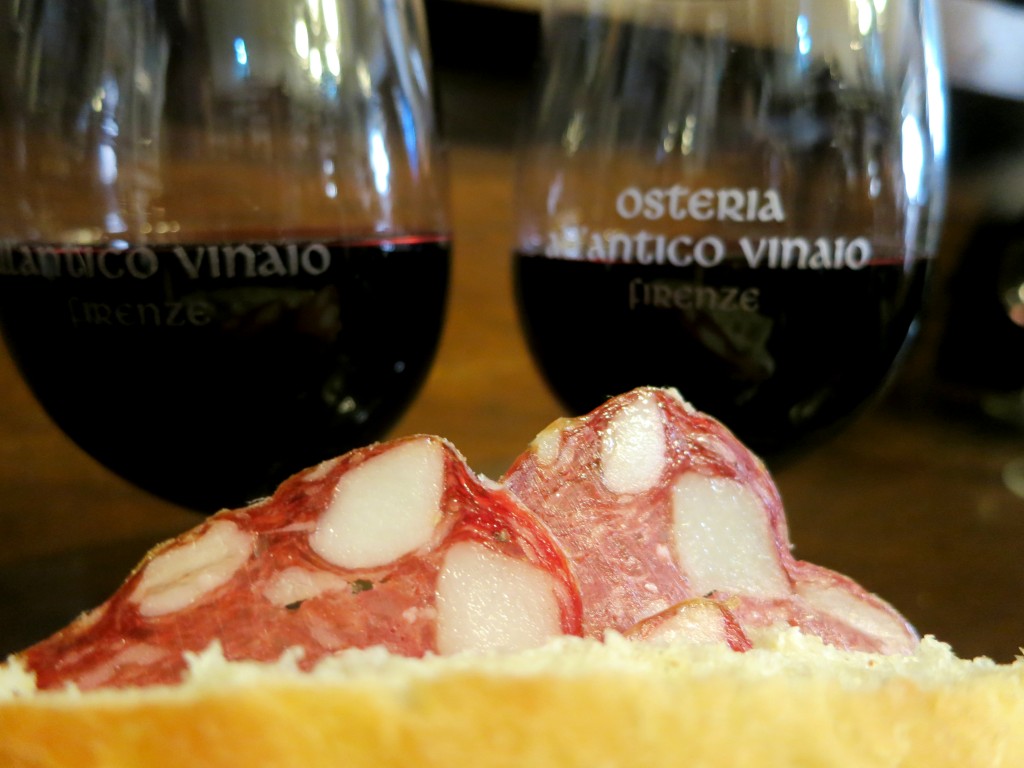 I finally got to eat here! It hasn’t taken a whole year to get here because it’s far from my house or open at odd hours, but because there’s always a long as the Mississippi line in front of All’Antico Vinaio in Florence. Boy, I’m glad I finally made it in and extra points for finding empty stools.

I was hungry and had an hour to kill in between tours with Walks of Italy. I needed to hit a spot that was close enough to the next meeting point, so I wouldn’t be late for the tour (a second time).

A fellow peep from the morning tour, Ali an awesome yogi from LA, asked if she wanted to grab a bite together. Huh, yes! Inside I was dying felling like the pressure was on. I thought ‘crap, you better show her a great spot since you’ve been here for a year now!’

Thinking cap was on and off to All’Antico Vinaio!! 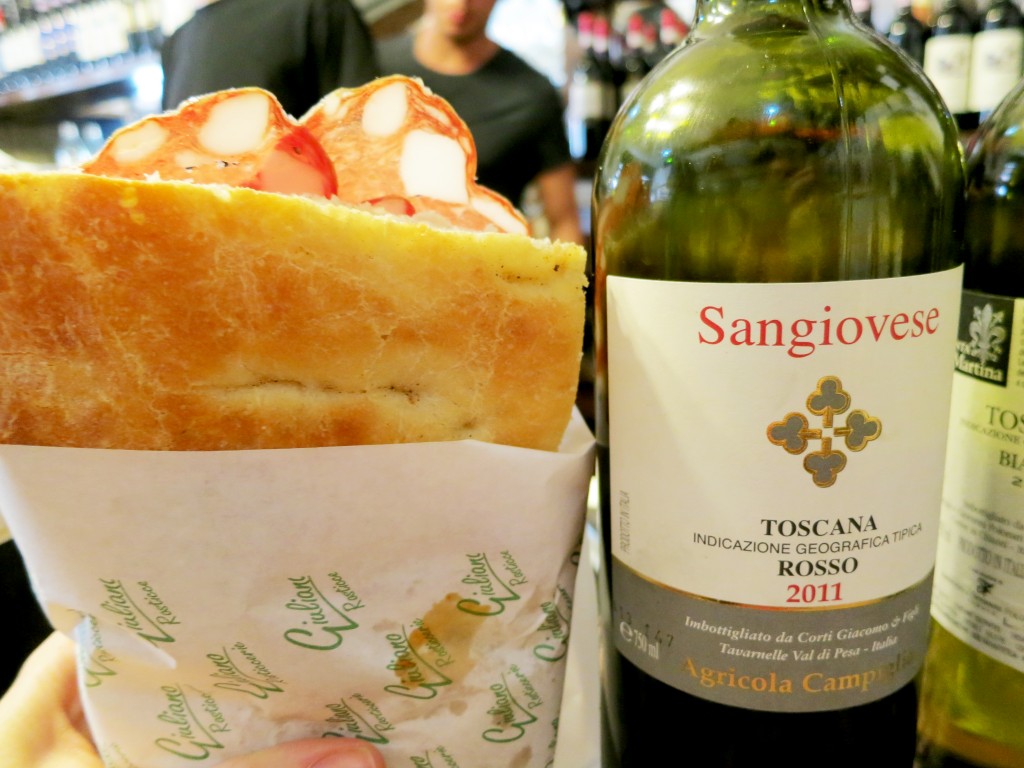 We both actually got focaccia (also known as schiacciata), which are two slices of salty bread bigger than your head! For € 5 you can pile on all the goodies. If you’re lost and insecure as to what to order then just tell the guys to make something special for you, they won’t disappoint.

Ali got porchetta (flavorful pork) and I got salami with stracchino cheese, sun dried tomatoes and hella spicy ‘nduja smothered on one slice. Queue the eye rolling. They were so big that we couldn’t finish them.

We were however able to polish off our € 2 sangiovese wine. Cheers!

Get your panini on 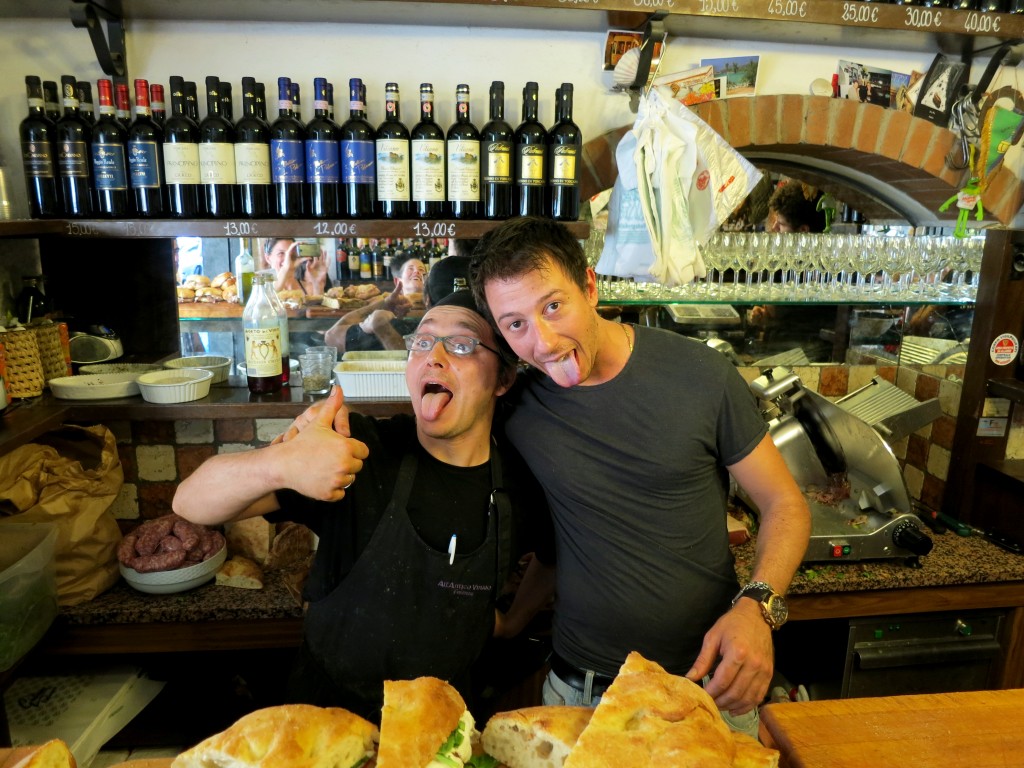 This was definitely one of my top panini spots so far. There are so many in Florence, but that doesn’t mean they’re all dreamy.

Where was your best panini?

I’ll be checking this out on our next visit! 🙂

You would love it! That street has 2 other great ones right across.

I am sooo jealous you get to eat Italian EVERY day!

Haha, yes it’s a pro, but the con is the inability to lose weight 😉

Discovered your blog accidentally and I am hooked. Love the way you write about the quirks of living abroad. We visited Florence in 2011 ( yes yes… We were one of those annoying tourists … Only consolation it was dec ) and loved the city. And yes, we went to this panini place but left because the line was long and my other half was starving ( men- their logical thinking is inversely proportional to hunger pangs) .

Haha, well it took me a few times to finally eat there because of the line! Luckily that day there was no line, so I had to go!

[…] to the most famous sandwich—I mean PANINO—spot in town, All’Antico Vinaio! It’s on Via dei Neri 65 between the Uffizi Gallery and Santa Croce. It’s rated as […]

[…] they freaking serve gelato. Two, the location is prime right on Via dei Neri 22r close to the best panini and my new favorite coffee […]

[…] we walked through Piazza della Signoria and sat down for a panino and Prosecco at none other than All’Antico Vinaio. When we were ready for a jolt of Jump, we just had to hobble half a block and there it was. The […]