If there is one thing that I recommend is to not walk, but bike Lucca and explore. It’s such a fun way to see, eat and drink everything. 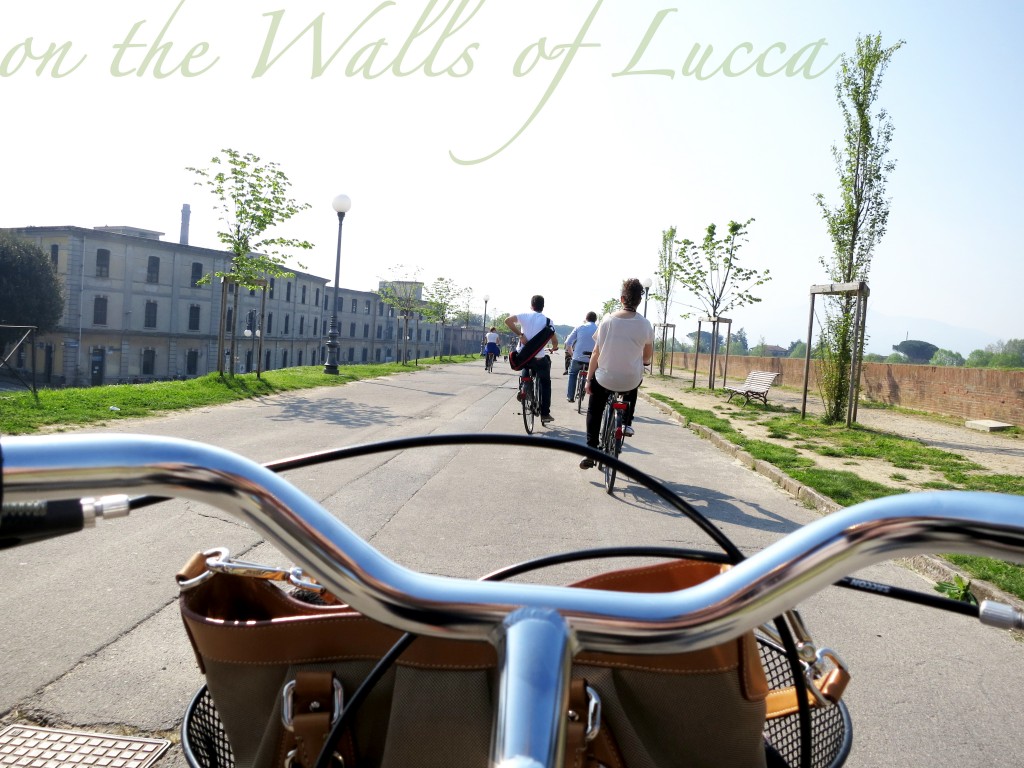 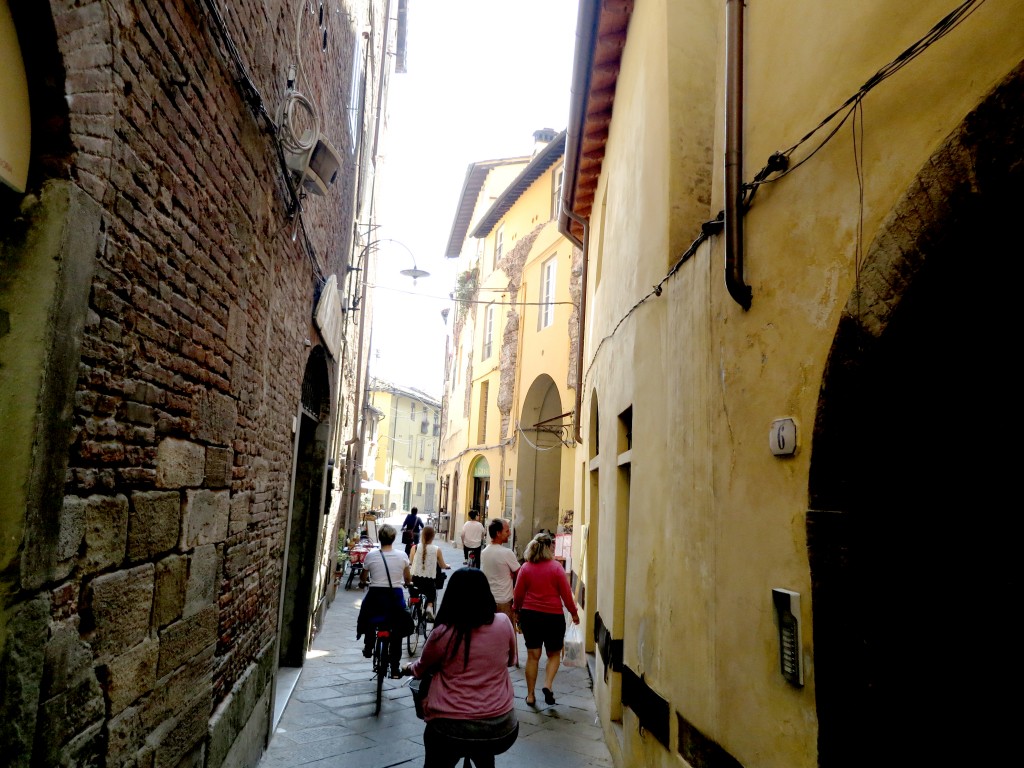 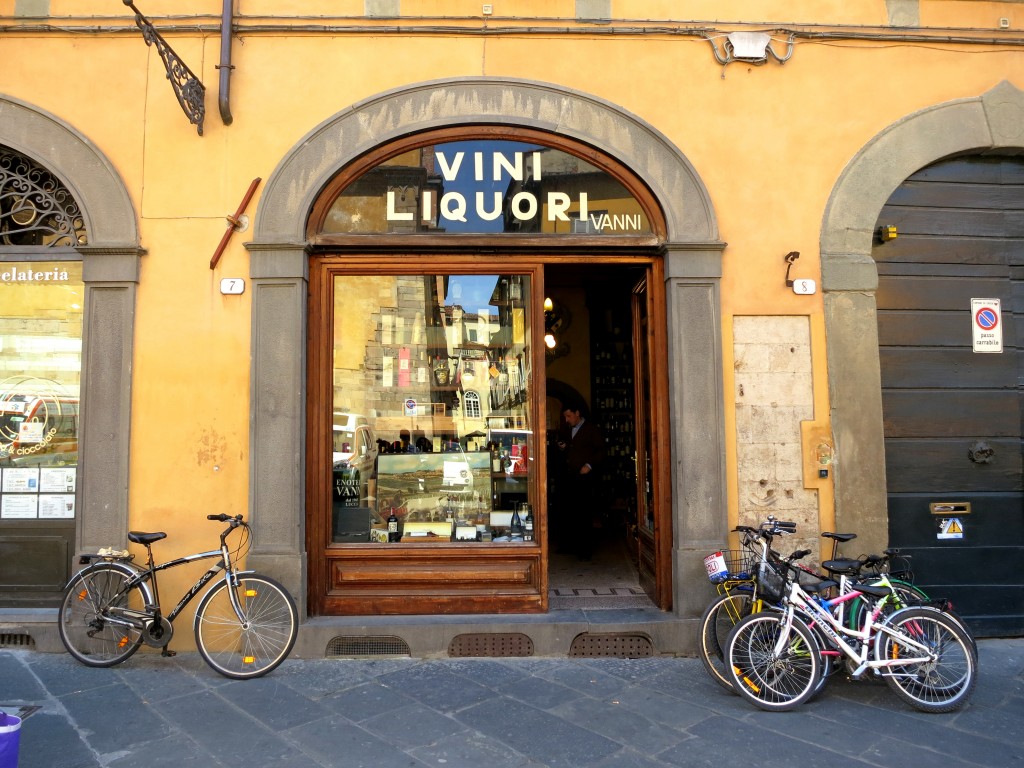 Lucca has so much more to offer than I ever realized from previous visits. Last month I was invited on a Tuscan blog tour with Play Your Tuscany and went on the bike ride of my life.

Bike Lucca: what to see 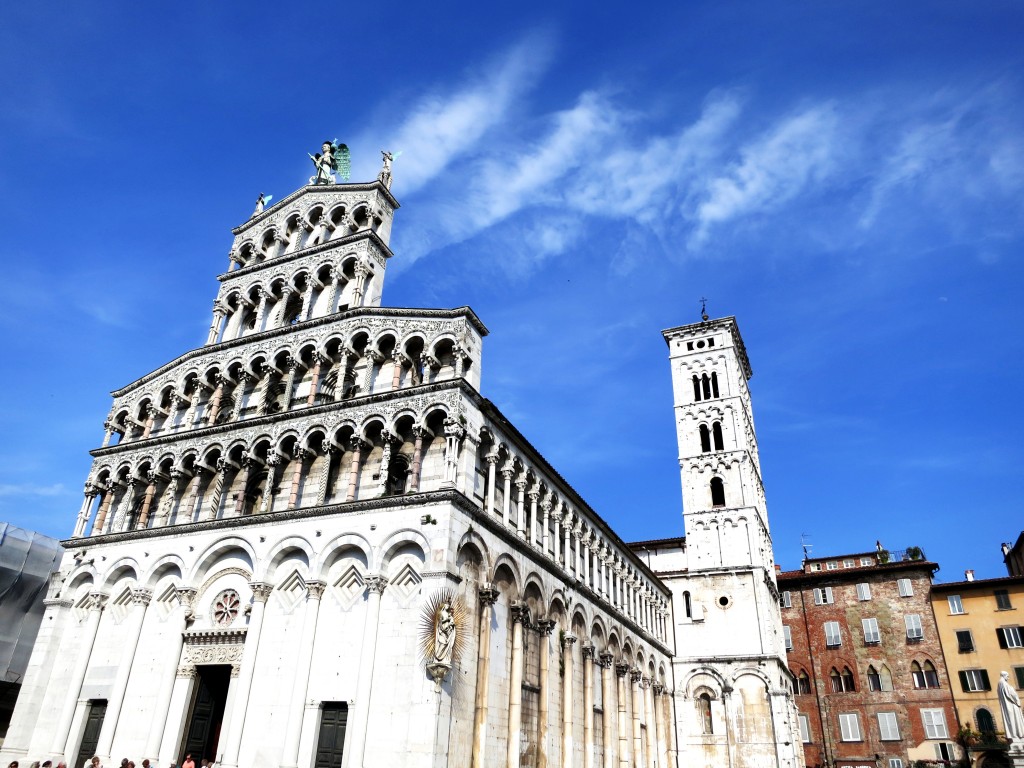 We were guided by a wonderful woman from the Province of Lucca’s tourist department. She had ten sturdy, colorful bikes with baskets ready to go. I do love baskets. Oh, and a lock. Don’t forget to lock your bike every time you ‘park’. Off we went. Around the walls of Lucca.

We took a little detour inside the walls where there is an incredible museum—totally unexpected. Our guide explained how the fortress was hundreds of years ago… the canons, the moats, the kings and queens.

We continued through the narrow streets until reaching the Guinigi Tower. What a cool tower with a lovely tree up on top to provide some well deserved shade. It was so relaxing to take a breath up there and see the 360 degree Lucchese view. 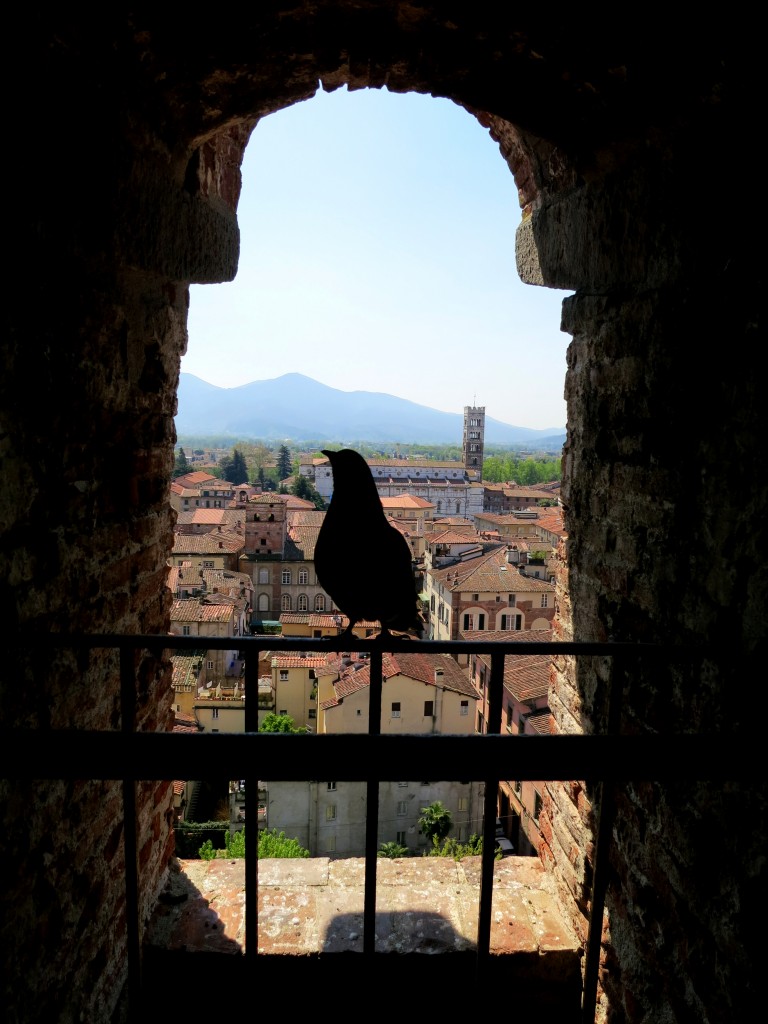 Next up were the colorful characters of Lu.C.C.A.‘s (Lucca contemporary art museum). The owner and chef treated us to a nice Vermentino Litorale produced by Cecchi paired with the most delicate ravioli I’ve ever had. A complete sensory explosion. We then took a private tour around the Antonio Ligabue exhibit.

I saw the David LaChapelle exhibit at Lu.C.C.A. a few months ago. They have a great line up, restaurant, lobby and impressive space for such a small town. Plus, the bottom floor is said to have been a Roman brothel from the 2nd Century. Don’t believe me? Go and see the suggestive murals yourself.

Another great exhibit not to be missed is at Domus Romana. This ancient site is the most recent ruin (oxymoron?) found in the area. It’s said to be a Roman house from the 1st Century. We nibbled on typical ancient bread with a Roman spread then washed it down with wine.

Bike Lucca: where to drink 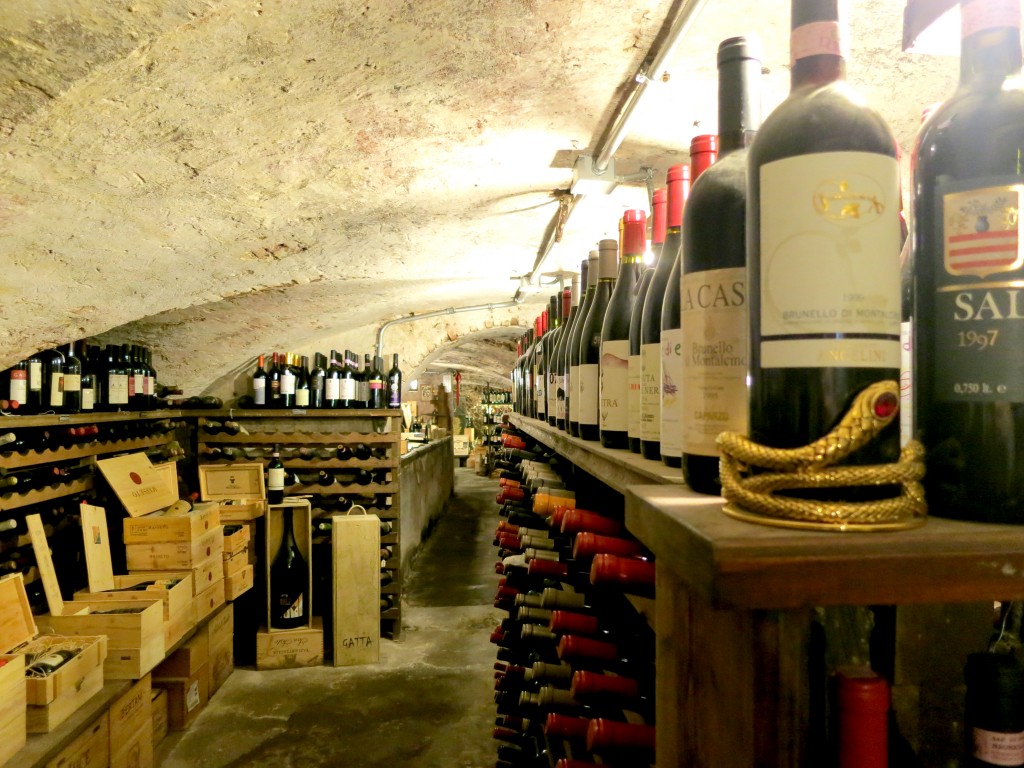 Wine time! We had an incredible wine tasting in a cave at Enoteca Vanni‘s wine and liquor store. It has been run by the same blood line for generations. Go and sift around their impressive collection.

Bike Lucca: where to eat 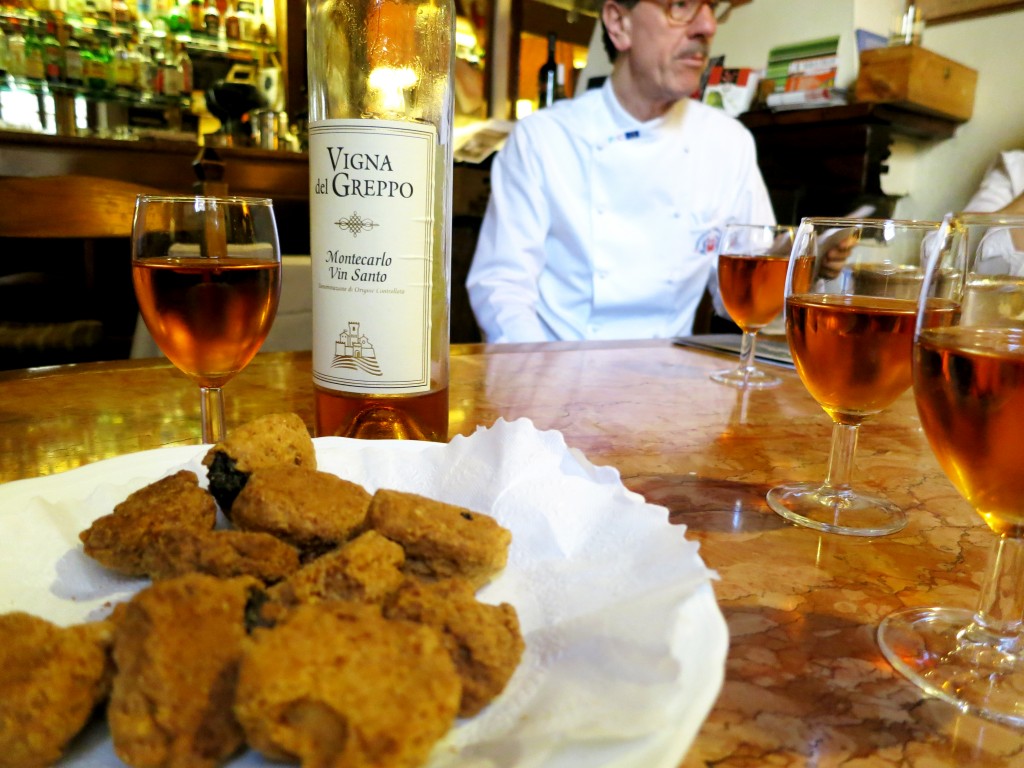 Caffè delle Mura is great for casual outdoor or indoor dining. Read the rare meat and special chocolate truffle and cigar treat I had.

However, if you are in the mood for a more swanky evening head to the oldest, topped ranked restaurant in town, Buca di Sant’Antonio. The head Chef was so gracious, serving us freshly baked biscotti’s to dunk in the chilled Vin Santo dessert wine. He recounted stories of the past—travellers who would crash at what is now the restaurant but was once a stable, bar and motel. It definitely saw some interesting hooligans come in and out hundreds of years ago.

Finally, I was able to bike Lucca out of all the times I’ve been there. It was one of the many highlights of the blog tour. The day before I had a really unique experience with Paolo Parisi, the Egg Master in Pisa and the day after we explored the mystical marble quarries of Carrara.

On the walls of Lucca…I recognize many of these places (also in your post about the wine and sigar tasting). It’s all not that big in and around Lucca center, so it’s indeed easy to get around. Great collection of places where to eat and where to drink!

You’re so right, it is probably hard to get lost in the center! Thanks, I loved our time there—they showed us around the best spots. Looking forward to going back soon.

[…] Check it out! For more tips and tricks for your Lucca adventure, check out recommendations from a fellow expat at Tiani’s Tuscany, Bike Lucca, what to see, eat, and drink.  […]

Hi Tiana,
My fiance and I are planning our honeymoon to Italy and unfortunately, some of our days in the Tuscany region are jam packed. I want to visit Lucca, but I think a Sunday is the only day we have available. Are most places closed on Sundays and do you happen to know if biking the walls would be available to do then? Thanks so much for any help you can offer.

Hi Siv. Thanks for stopping by! Wow, a honeymoon in Italy, I can’t think of a better destination, how exciting!

Sunday should be OK, not sure if many stores will be open, but you should be able to rent bicycles…after all they probably get more rentals on the weekends. Plus, restaurants will be open. Hopefully you can check out the spots I recommended, they are amazing!

As for bike rentals you can simply google 2-3 business and email them directly if you have questions….I did a quick search and found these:
http://tuscanbike.it/en
http://www.puntobici.lucca.it/index.php?lang=en
http://www.tripadvisor.com/ShowUserReviews-g187898-d4112383-r159532803-La_Toscana_Nel_Cuore_Rent_Bike_Co-Lucca_Province_of_Lucca_Tuscany.html

Have an amazing honeymoon!

[…] of Tuscany, but now it’s time to see the other side of Tuscany! So far I’ve been to Lucca, Pisa, San Miniato, Val D’Orcia, Montalcino, Fiesole, San Gimignano, Castellina in Chianti, […]

[…] a place in Tuscany that’s 30 minutes away from Pisa and Lucca…and it’s NOT Florence. It’s a place with the most incredible pastries filled […]